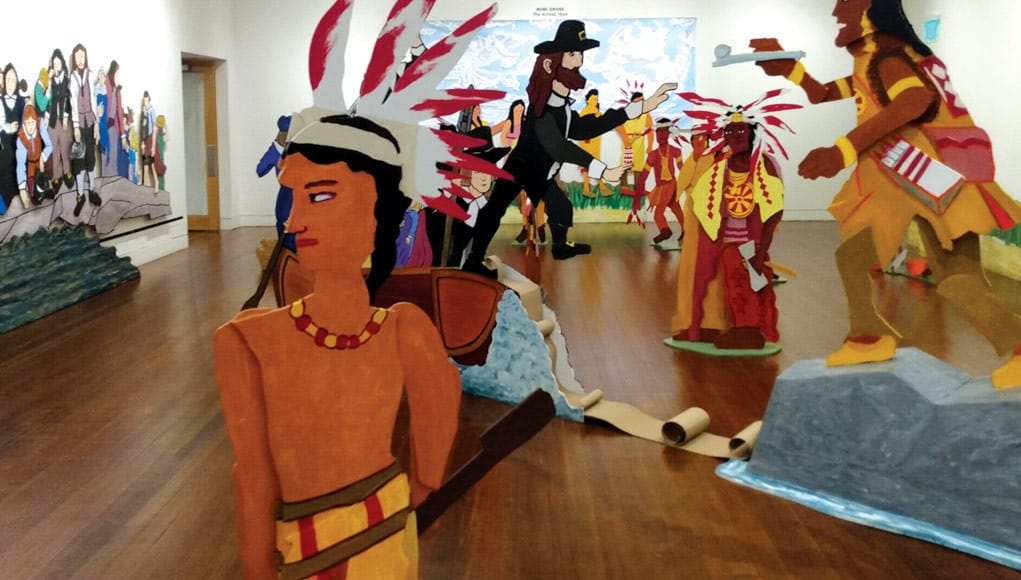 All photos by Rebecca M. Alvin.

These are heavy times. So much so that even pointing it out is a bit cliché. But it’s the truth, and it’s palpable that many of us are carrying a deep heaviness in our individual spirits. So much of the familiar is temporarily gone, and has been for so long that it is increasingly hard to find those things that brighten our minds and souls. There is of course the natural beauty of the Outer Cape, but there is more. In this time of tumult and high anxiety the Provincetown Art Association and Museum (PAAM) is a source of mental rejuvenation, especially with the quartet of exhibitions now on display.  Taken independently each show is special. Taken collectively, the museum’s shows are a spectacular example of the depth and scope of creativity and imagination in Provincetown, demonstrating how not only do those qualities continue to thrive in times of adversity, but that they are indeed vital to overcoming them.

Invited to create a site specific installation for the 400th anniversary of the landing of the Mayflower in what is now Provincetown, Mimi Gross presents an immersive and memorable work titled The Arrival: 1620. Curated by Breon Dunigan, the installation is presented as if the viewer were walking through a historical diorama depicting a thriving Native American community as the hull of the Mayflower plows through with the heft of an invasion. The installation refutes the pleasant myths and lies of the Eurocentric view traditionally taught in American culture.

Kahn and Selesnick is an artistic duo and their eponymous show celebrates their three decades of creative partnership, an endeavor that began here on Cape Cod. Much of their photographic and installation work is on the Outer Cape as they create fanciful worlds. The exhibit itself, co-curated by Maura Coughlin and Mark Adams, exudes that energy of an Age of Exploration anthropological exposition. And it’s marvelous. The photography, with its manipulated images accompanied by costumes on mannequins and a table of artifacts dazzles, combining fine art, devilish trickery, and thoughtful narratives.

PAAM Executive Director Chris McCarthy curated Gems from the Permanent Collection, a compelling assembly of works that show the depth of both the museum’s holdings and Provincetown’s artistic heritage and legacy. Featuring over 40 pieces, the show includes works by Edward Hopper, Salvatore Del Deo, Varujan Baghosian, Blanche Lazzell, Lazlo de Nagy, and Charles Webster Hawthorne, the founder of the Cape Cod School of Art, establishing Provincetown as an art colony. The presentation includes oil painting, photography, studies, drawings, and white line prints (a technique developed here in Provincetown) among other mediums, illustrating the breadth of artistic work done on the Cape tip over the past century. It is a marvel to consider all that has happened artistically in Provincetown, and this show helps to wrap one’s head around it.

Lastly, Alvin Ross: A Centennial Exhibition is a stunner. Born in 1920, Ross became the president of the Provincetown Art Association in 1973 and sadly died of cancer two years later at the age of 55. The addition to PAAM is named in his honor. While working during the height of Abstract Expressionism he stuck to smaller still life works, painting groceries from the A & P and blueberry muffins, as well as portraits of himself and his family. His use of light and color is masterful. His choice of subject enchanting. Overall, his work is mesmerizing, at times capturing the motion of a moment or the stillness of his father sitting for a portrait. PAAM holds a significant amount of his work, which is included in the show alongside pieces on loan from private collections. It’s a must see.

In keeping with health and safety protocols reservations must be made in advance to visit PAAM. Do yourself a favor and schedule a visit, as it will do wonders for your disposition.