It’s 15 minutes to curtain and the star of the show is being a drama queen when he’s suppose to be preparing to play King Lear. But his prop crown isn’t polished to his satisfaction, he continually asks in panic what his first line is, and never mind that the air raid sirens are roaring as the Luftwaffe begins to bombard the English city of Plymouth while the audience assembles in the theater rather than the bomb shelter to see this legendary Shakespearean actor take the stage. While there is nothing he can do about the bombs falling out the sky it is up to the dresser to prevent that night’s production from bombing. It’s all up to him to, as the British say, keep everyone calm and carrying on.

The newly formed Provincetown Theater Community Project presents its sophomore effort of its inaugural season at the Provincetown Theater with this delightful and quirky play by Ronald Harwood. The South African playwright brilliantly captures the sly humor and subtle savagery of British humor, even in times of great peril. The story and the action lie between the lines of the dense dialogue. The loudest message is in what the characters don’t say rather than what actually comes out of the stiff, British-upper lip. And the cast of community players does an admirable job bringing the characters to life in this story of love and life, both on and off stage, set during the bleak years of the Blitz.

The hallmark of this production, and perhaps the vision of what the Provincetown Theater Community Project will be, is that it gives the opportunity for cast and crew to pursue and present what they are best at, providing room to experiment and grow. Bragan Thomas plays Norman, the dresser to Sir, a grand English stage actor played by Clyde Shelby Mellert. The pair create a compelling repartee, as do Judith Partlow as Her Ladyship, Jo Brisbane as Madge, and Edwidge Yingling as Irene, providing contrast to the way the self-absorbed actor deals with women, love, and lust, all the while paying close attention to the Easter eggs hidden throughout the script about this emotional steamroller of a man surrounded by people who love him while he loves only himself.

The costume design by Phoebe Otis and the set design and construction by Tristan DiVincenzo and James Massaro, respectively, are also shining examples of how this PTCP production illuminates the talents of the community, all of which have been ably shepherded by director Anthony Jackman into what is a theater lover’s theatrical performance and an ambitious, non-traditional choice for a Cape Cod theater where the risk is part of the reward.

The Dresser runs at the Provincetown Theater, 238 Bradford St. Thursday through Saturday at 7:30 p.m. and Sunday at 2 p.m. through April 24. Tickets are $25 ($20 for seniors and students) and are available at the box office and online at provincetowntheater.org. For more information call 508.487.7487.

Mondays at the Mews 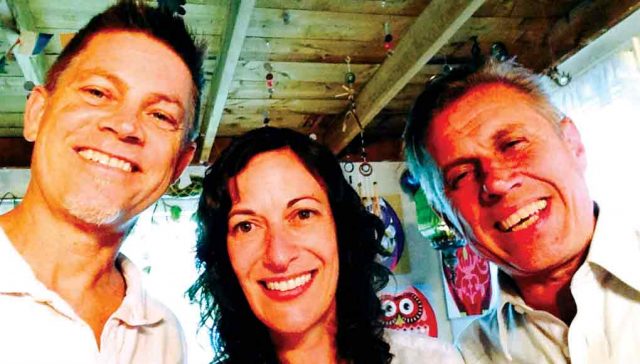 It was a quiet Monday night with nothing particularly remarkable about the weather or news about town for a winter evening.  The open mic Coffeehouse at the Mews was about to begin. Singer-songwriters from around the Cape signed up to present new work or a cover of a favorite song, as did a few poets eager to share their latest verse. A pleasant woman in her sixties with a friendly smile asked if she could read a short excerpt from a memoir she was working on.  Upon taking to the small stage she adjusted the microphone and introduced herself. She was Katherine Ann Powers and she had been a 1960s radical and a fugitive for 23 years and was on the FBI’s Most Wanted list after participating in a bank robbery in Brighton where a Boston police officer was killed.

The room was silent. She certainly had everyone’s attention.

For 25 years Coffeehouse at the Mews has provided a space in Provincetown for experimentation, welcoming everything from the traditional musician and writer to the strange and bizarre to the surprising. A beloved winter tradition, the Coffeehouse is finishing up its 25th season, in particular with two special feature performances. As has been the case over the years, each open mic night is punctuated with an invited performer. But for the 25th season co-founders Peter Donnelly, who is also the host, and Ron Robin, owner of the Mews, solicitinged sponsors to bring in acts the Coffeehouse traditionally could not afford.

“Just about every season is good, but this one has been particularly good,” says Donnelly. “The featured acts are always a big draw and bring up the professionalism of the room. The open mic brings in community and an element of surprise with all the various acts that come in each week.”

Boston-based singer-songwriter Cosy Sheridan’s featured performance on the 18th is followed by the Cape Cod band The Daggers, one of the special 25th anniversary features, followed by Broadway actress, cabaret star, and comedian Christine Pedi on May 2, with the final Coffeehouse of the season closing with The New Beach Band.  All of those nights will of course have the open mic portion of the evening, full of music.

“Unlike most open mics we actually have a steady audience,” says Donnelly. “It’s not just performers performing for a room full of other performers waiting to go on stage. The rewarding thing is people come in for years wanting to perform and finally do it and succeed. And then you have some people who do it and then realize, ‘Oh. I can’t sing,’ and never do it again because it’s not their thing. But it’s something they wouldn’t have realized if they never took the risk. You have to take risks. And we provide a safe space for that.”

Donnelly estimates that over the past 25 seasons there have been 10,000 individual performances that have included everything from a cooking demonstration to West End Wendy Wendell yodeling to the late street performer Ellie singing Frank Sinatra. Celebrities also pop by from time to time, and over the years the corner stage has hosted Norman Mailer, Sebastian Junger reading portions of a work-in-progress that later became The Perfect Storm, a young Ryan Landry doing comedic pieces reading the Mews menu or the National Enquirer, and Kate Clinton administrationworking on new material.  Just a few weeks ago political comedian Jimmy Tingle delighted the audience with new work provided by all the ripe-for-comedy material coming out of the Presidential election campaigns thus far.

However, what is at the core of Coffeehouse are those musicians that frequent the Mews developing their own followings and creating a musical life of their own. Chev Hardy, Frank Poranski, and Brenda Evans are just a few that Coffeehouse can claim as being native sons and daughters, musically. It’s a rare and difficult feat to maintain an institution for 25 years and have it not only be relevant, but also flourishing.

“It’s just community,” says Robin explaining the Coffeehouse’s success. “It’s like a get together. It’s something to do on a winter’s night, a place you can go and hear some good music. A place that you can go see musicians grow. That’s what’s exciting, to see these performers, people from a 15-year-old high school kid to people in their eighties doing their own material. It’s an exciting platform to have in town for people to be able to do something like that.”

Coffeehouse at the Mews is every Monday starting at 7 p.m. from November through mid-May at the Mews Restaurant and Cafe, 429 Commercial St., Provincetown. Reservations are strongly recommended for table seating. Standing room is available. There is a $3 suggested donation, which benefits the Provincetown Theater and Outermost Community Radio – 92.1 WOMR. For more information call 508.487.1500 or visit mews.com.

Coming Up at Coffeehouse

The Voice of an Era

If there’s one thing that gets Little Anthony upset, it’s the constant reference to his 60+ year body of work with Little Anthony & The Imperials as “doo wop.” The term actually originated in 1961 and was used to describe street corner singers of the 1940s and 1950s who sang in a style that emphasized group harmonies and swing rhythms. While Little Anthony (a.k.a Jerome Anthony Gourdine) acknowledges that his musical career did begin on the street corners of Brooklyn, NY, he has never taken to the “doo wop” term because it was applied after the fact. For Gourdine, his music is and always will be R&B.

“You know how I can tell you it wasn’t ‘doo-wop’?” Little Anthony asks. “Because I was there,” he answers emphatically.

Sometimes time and the intricacies of human memory conspire to confuse the general public, and our collective understanding is tainted by lazy attempts to classify things under arbitrary labels. And so, even on the group’s own website biography, the term “doo wop” has to be referenced. Regardless, for Outer Cape fans it will be an absolute delight to welcome Little Anthony & The Imperials to Provincetown Town Hall on April 16th for a concert produced by Payomet Performing Arts Center.

The group is one of the few 1950s era pop R&B groups to continue touring, albeit with some replacements in their lineup. For Gourdine, music is all he ever did, having been discovered in 1957 at the age of 17. The following year, the group released its first single “Tears on My Pillow” (written by Sylvester Bradford and Al Lewis), and the hits continued into the 1960s, including “I’m on the Outside,” “Goin’ Out of My Head,” and  “Hurt So Bad.”

Gourdine recalls his state of mind at the time: “No kid at 17 starting out with a singing group would ever think anything other than what you immediately experience and feel that a hit record can do. Number one, you knew that you would get closer to girls.”

In 2009, Little Anthony & The Imperials were inducted into the Rock and Roll Hall of Fame. More recently, the 75-year-old has continued recording, including a few duets he’s done, such as the song “Electric Together” he collaborated on with George Benson and a new duet that will be released this June with actress and singer Rebecca Holden.

“Rebecca Holden was really fun because I’ve done a lot of things, but she was the first stage singer – what we call Broadway type singer…She has this very high, very trained voice, classical, and here I am a saloon singer, and I had to match up with her,” Gourdine explains with a laugh.

In 2014, his biography Little Anthony: My Journey, My Destiny, written by Arlene Krieger, was released. For Gourdine, the process of preparing his memoirs for the book was filled with the good and bad we all experience when we reflect on our lives. Mostly, Gourdine says he wanted the book to be about all of the amazing people that came in and out of his life and not just about his own adventures in the music business.

Would Little Anthony do anything differently if he had it to do again?

“Probably,” he laughs. “I mean, if I knew what I know now, oh my goodness, I’d be a billionaire!… The thing that I would change is I learned that it’s a business, that’s why they call it show-business.”

That’s something many of us in the arts can identify with. While he may not have focused his energies on the business end of things, he certainly has survived the many changes in the industry and stands tall with a voice that is still a remarkable gift.