Patriots’ Day Weekend is upon us and that means one thing: it’s time to see who will win the crown at the Crown. The Miss Gay Massachusetts USofA Pageant is a rite of spring and a beloved tradition of this soft opening to “the season” in Provincetown. The reigning queen Bang, also known as Christopher Kosiavelon, battled some jet lag after taking the red eye from Los Angeles to Boston to answer a few questions about drag pageantry, living in the age of RuPaul’s Drag Race, and what’s next for Bang.

Provincetown Magazine: This was your first foray into the world of drag pageantry. What did you learn over your year as Miss Gay Massachusetts USofA?

Christopher Kosiavelon: I have definitely learned a lot from diving into the pageant last year. The most important thing I took out of the experience was to never forget to pay attention to the details.  Drag is supposed to be fun and exciting and it really can be whatever you make it, but a small amount of discipline will really set you apart. I think the one thing I learned about myself that made me happy was knowing that Bang will never compromise who she is for any situation. I went in and gave them me on a platter, they just happen to have like what I was serving. Lucky me.

PM: What was your experience like at the Miss Gay USofA Pageant in Dallas last May?

CK: Terrifying. The contestants for the Miss Gay USofA Pageant system are no joke. These girls prepare an entire year to make sure that they have the tightest and best executed package that they can. It pushes you to be the best that you can be.  I was competing with the likes of Roxie Hart (who won!) and Kennedy Davenport, who not only came in second place at the nationals, but she just came in second place on RuPaul’s Drag Race: All Stars 3 as well. That’s some stiff competition. But I’ll tell you what… not only did I have all the hot backup dancers in my bed at night, but in the day I had some of the other competitors over to give me massages and to stone my shoes and nails for me. Bang is ALWAYS a good time. Hahaha. I made some really good friends while I was there.

PM: We’re living in the age of RuPaul’s Drag Race. In your opinion what effect has the show had on drag performance, be it here in Provincetown or elsewhere in the country?

CK:  RuPaul’s Drag Race does an amazing job of showcasing drag queens to the masses. It definitely lacks showcasing what these girls really do outside of the show, and that can bother a lot of viewers, but what I think that does is plant a seed in people that watch the show to want to go out and see what drag shows are like in person. It has really given a resurgence to drag (for now) while it’s on a high. Provincetown has always had some of the TOP drag queens from across America like Varla Jean, Ryan Landry, Thirsty, Miss Richfield, Coco Peru, Dina Martina, and so many more that I look up to tremendously. It’s great that we have their careers that really thrive in this “Drag Race Age” even with all the Drag Race girls that push their shows here in Ptown at the same venues as these legends. At the end of the day, with out these big names I mentioned… drag race would be nothing, the “Ru-girls” get their inspiration from not only pop culture BUT from stars like the ones we have in Ptown.

PM: What do you think of season 10 so far? Any early predictions?

CK: I think I’m a different kind of viewer for this season. I’ve had the pleasure of meeting a lot of the season 10 queens before they got on and have watched some of them grow. It’s nice to see good people finally get their wish granted to go make a fool of them self on TV. Ha ha. I just got back from a few weeks in LA where I was able to watch the first two episodes at the famous Mickey’s Nightclub in West Hollywood with Mayhem Miller who had given up auditioning for a few years, and to watch her cry so hard after watching herself win the first episode… it really touches me to see these queens as real people with big dreams and become successful. This season is jam packed with big personalities and even bigger talent.  I think it’s up there with season 6, which was my favorite!  Early prediction?  Asia T O’Hara for the win. Miz Cracker for Miss Congeniality (her original name Briana Cracker… Brie On A Cracker… genius) But the real break out star?  Say it three times with me. “Miss Vanjie… Miss Vanjie… Missssss Vangiiiieeee”. If I see one more miss Vanjie meme on my Facebook….. 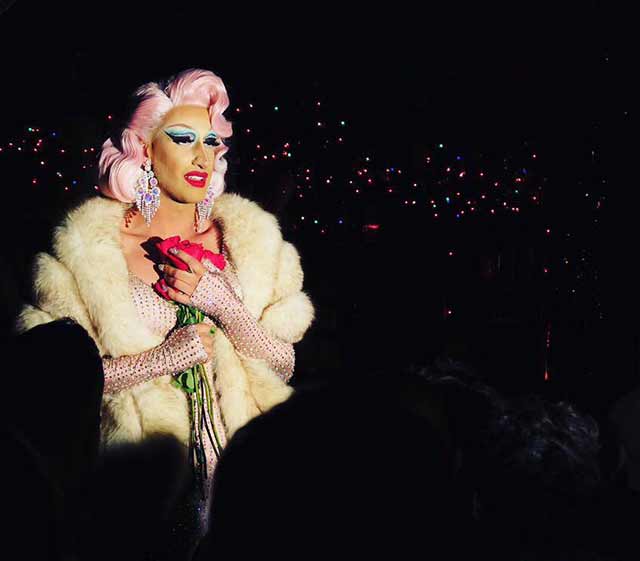 PM: Is being on the show still a goal of yours?

CK: You know, being on the show isn’t the ultimate goal. Having the platform it would offer to be a good role model definitely IS the goal… I grew up in a really shitty place with really shitty people. Not to get too deep but I have been in a lot of life threatening situations and it forced me out of my home at a very young age. I didn’t have anyone tell me I could be as weird as I am (because I’m weird) and still be safe, they actually taught me the opposite. But going to the gay clubs of Boston at the age of14 opened my eyes and really gave me reason to keep being me. Until I saw drag queens being as weird as they wanted to be and having a safe place to be whoever they want, I didn’t know it was okay to be me. I would love to be on a show that would give children like me drag queens to look up to. Also, it’s about time Ptown had some representation on Drag Race, right? I think Thirsty would make great TV.

PM: What are your future plans and goals for Bang?

CK: I’m actually on a much-needed break right now. I have spent so much time and money on Bang that I started to forget about Chris underneath. Without Chris, there’s no Bang. I’m focusing on my health and bettering myself as a person at the moment. I’m also taking a moment to see what Bang can give back to the community. I’ve been having conversations about Bang possibly being a representative of the Generations Project here in Ptown, and I’d love to start creating some content here in Ptown to help educate… but it has to start with Chris.

PM: What’s your advice for the next Miss Gay Massachusetts?

CK: Don’t do it!  Just kidding. I say make sure to be yourself and let the stress of it drive you.  Don’t go to win. I was only competing with myself when I was there. The other competitors are there to teach you something, so be open to everything.  Once you think you are the best and that you have nothing to learn, that’s when you’re wasting your time. Oh. And HAVE FUN!  We are men in wigs. Also, don’t let them forget you. Ha ha. Maybe I’m not the best person to take advice from, though, I broke two rules in just my performance in Texas alone. NO liquids. NO swearing. But who is Bang without a little blood and an occasional [email protected] YOU. I make my own rules.

The USofA Royalty in Review drag show is on Saturday, April 14 and the Miss Gay Massachusetts USofA Pageant is on Sunday, April 15 at the Crown and Anchor, 247 Commercial St. Both are at 8 p.m. and tickets for each event are $30 for general admission and $40 for VIP. Tickets are available at the box office and at onlyatthecrown.com. For more information call 508.487.1430. 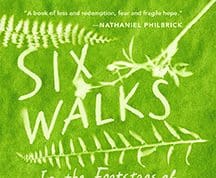 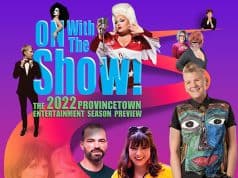 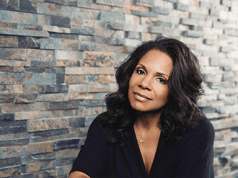