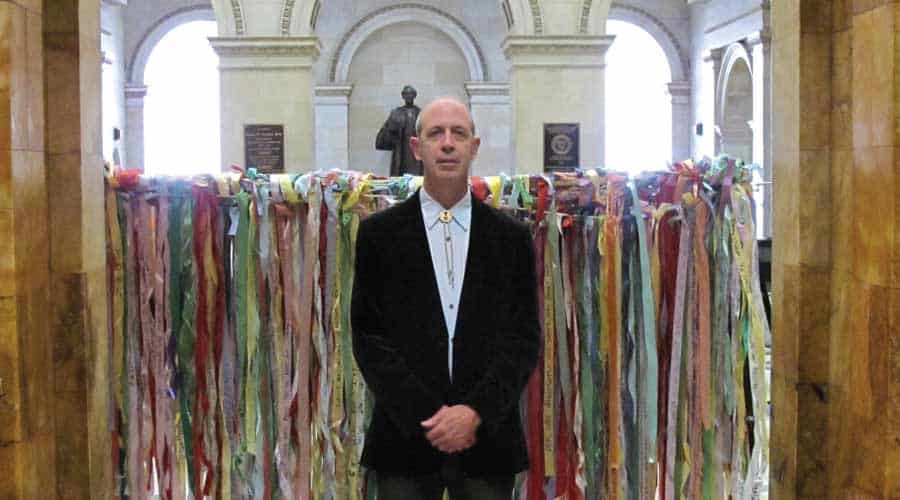 A Q&A with Founder Jay Critchley

This year marks the 25th annivsersary of a Provincetown institution. The Provincetown Community Compact was founded by Jay Critchley in 1993 as an organization that would help artists, individuals, and small organizations raise funds for ideas that would contribute to the culture and environment of Provincetown. Since its inception, it has contributed to the successes of many of the town’s most important cultural and philanthropic organizations, not the least of which is the Swim for Life. Critchley took some time to walk down memory lane with us and prepare us for what is to come in the next 25 years.

Provincetown Magazine: What is the Provincetown Community Compact and how/why did you start it?

Jay Critchley: Being resourceful is a necessity living on the tip of this spiral spit of sand. And that sand is moving faster than we thought. The dramatic breach at the beach at Wood End is symbolic of the ecological and civic transformation that is taking place here and globally. Where is solid, common ground? This is the idea I write about that opens “The Compact Chronicles,” which is the online story of the organization and the town through my personal lens.

The concept for The Compact was to establish a platform that would nurture the community. Yes, we needed a tax-exempt entity to support the Swim for Life, but its mission is much broader: to support the vitality of a changing community, to nurture the health and well-being of the Lower Cape – its culture, economy, and the environment.

PM: What exactly is a fiscal sponsor and why do projects need one?

JC: Practically, The Compact provided a way for artists and community projects and startups to develop and experiment with an idea without dealing with the expense and energy of setting up a nonprofit. Take the concept and run with it, find some funds, network. This incubator process provided a tax-deductible umbrella for dozens of individual projects and their donors and funders. Often it was just a few hundred dollars, but that was significant for the individual. It was validating for those who needed someone to listen, to strategize. The Compact board chair, Ginny Binder, came up with the name, the “Think-ubator.”

PM: Describe for us the Provincetown of 1993. How was it different and how was it the same?

JC: There was no municipal sewage system so there was a constant stream of trucks on Commercial Street pumping out overflowing septic tanks, the smell wafting throughout the town. And there was no Fox News.

The Town was grappling with the raging AIDS pandemic and the parallel decline of the fishing industry. It was jolted from its age of innocence in 1989 when a highly, sexually provocative sign (unprintable here) carried in a LGBTQ march ignited the seething anger of a dramatically changing community. This was fortuitously captured by filmmaker Seth Rolbien’s Provincetown USA PBS documentary.

PM: What are some of the more memorable projects the Compact has acted as fiscal sponsor for?

JC: Early projects initiated by the organization include the management of dune shack residencies and the creation of an archive of artists who have died of AIDS. We also planted trees in town for many we lost.

Perhaps the most touching and far-reaching project has been The Prayer Ribbons. Begun at the Swim for Life, (which, by the way, has raised $5M for AIDS, women’s health and the community), it expanded its community building and healing potential to the City of Orlando after the horrific nightclub massacre.

A special strand of colored ribbons was dedicated to the 49 victims (plus one for the survivors) whose names were inscribed in gold on black ribbons. Following a ceremony at Town Hall, we transported the ribbons and met privately with the families of the victims. We have been invited back to Orlando with these Prayer Ribbons to the second anniversary commemoration on June 12.

PM: What do you see looking forward to the next 25 years of the Compact?

JC: Nurturing the community by embracing and reinvigorating our vibrant cultural inheritance and our vital health organizations as we approach 2020 and beyond. Paying attention to rising sea levels and the rising divide between year-round and part-time residents, supporting the school and young people. One of our initiatives for the 25th is offering two $2,500 grants, one to an artist under 30 and the other to someone of any age for a project that enhances the environment and quality of life. Only year-round residents of Provincetown and Truro may apply. Deadline June 15 (thecompact.org).

The mission of The Compact and the fate of the town are symbiotically linked. We will continue to be the open door for grassroots projects and visionary ideas that will nurture Provincetown as a bonfire of reverie and community aspiration. Is it not an American story? 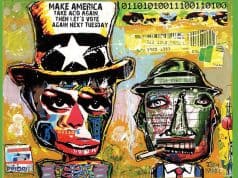 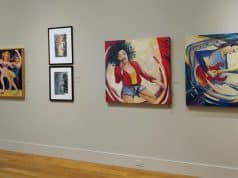