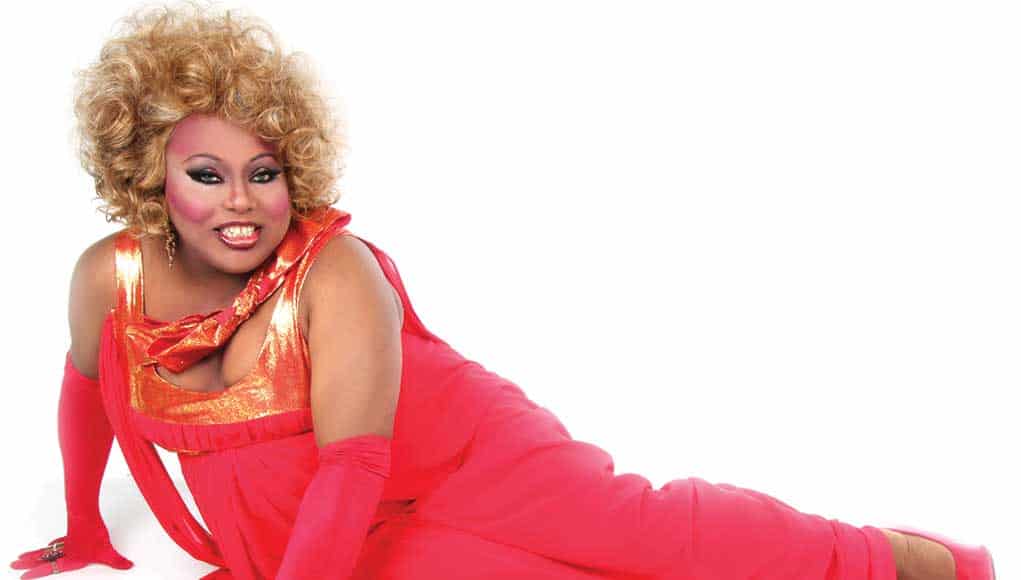 There are a few red and yellow tulips alongside the road on Nelson Avenue presenting spring in a splash of colors. It begins to sprinkle and spots darken the paved walkway. Tisch DeWilliams comes to front door offering a big smile and a big hug.  The prism of colors throughout her home rivals the floral offerings of the season outside. Red organza over there and a splash of silver sequins here and a shock of green lamé in between. A few Styrofoam heads with wigs in various states of styling appear throughout. This is the workroom of a drag star, and these are the tools of the trade.

Soon, it will be opening night of Illusions the longest running drag revue in Provincetown, in which DeWilliams stars along with her good friend Billie Jean, Payton St. James, and Roxy Pops.  Saturday night’s show at the Crown and Anchor begins not only the 2018 season where she and her co-stars will perform over 70 shows, but it is also DeWilliams’ 40th year as a drag performer. When thinking about that number she shakes her head, laughs, and shrugs her shoulders. A native of Oklahoma City who began her journey to drag superstardom in Wichita, Kansas, before landing in Provincetown in the mid 1980s, DeWilliams loves what she does. In fact, she just loves. It’s the word she uses most often.

She loves working at the Crown and Anchor. And she loves how much owner Rick Murray and assistant general manager Rick Reynolds support the show. She loves the summer schedule for Illusions, Saturday and Sundays at 10 p.m., which brings in a party crowd, and Mondays and Tuesdays at 7:30 p.m., which, she notes, is good for children. And she adds for emphasis that the show is good for children. She loves that in Provincetown people want to bring their children to drag shows, something she notes is a rarity in most parts of the country when she goes on tour.  There’s no place like Provincetown, she adds. She loves that straight people come to drag shows here as while that is not as uncommon as children at shows throughout the country, here she finds the straight audience members are often seeing their very first drag show and they are so interested and engaged.

Forty years in drag is a long time. But 40 years on top is another thing, as she is one of the genre’s most beloved and accomplished. She’s seen it all and been through most of it, too, with changes in tastes, politics, and culture. So now that we are 10 years into the era of RuPaul’s Drag Race she doesn’t pay it much mind. Do what you do, and love it, and the rest falls into place. But there’s also a lot of hard work. All those outfits and fabrics that surround her are what will be on stage this season as she conjures up Patti LaBelle, Donna Summer, Gladys Knight, and surprises. Lots and lots of surprises. And what she says next is surprising. “There’s too much drag in Provincetown,” says De Williams raising her eyebrows, knowing what she just said is provocative. “I’m lucky that my name is established. It makes a difference. Don’t get me wrong. I love drag. But we could use more variety. When I first came to town there was a lot of drag, but also a lot of comedians and singers and a whole lot of all kinds of shows. But I get it. I get that RuPaul has made it so popular and he helps a lot. But I love all kinds of entertainment.”

Starting drag in the 1970s seems so long ago, a lot longer than 40 years, considering how much has changed in that time period. DeWilliams looks out the window and remembers those early days in Wichita—how exhilarating it was to perform in those heady disco days of early gay liberation. She points a finger in the air and remembers when she brought Jimmy James to Kansas in the 1980s. Just publishing a photo of him as Marilyn Monroe in the gay newspaper drew a crowd of 900. What a night, she recalls. It’s that love of performing that’s driven her for four decades.

It’s also a love for oneself, because as RuPaul says, “If you can’t love yourself, how in the hell you gonna love somebody else?”  RuPaul may have made that phrase popular, but it’s always been at the root of good drag. DeWilliams puts her hands together in prayer fashion and says how hard it was to be a black drag queen when she started. She’s proud of her accomplishment for being able to overcome those obstacles, that her life went in a positive direction, and that she gets to share that love with everyone else on stage.

“Life is beautiful,” says DeWilliams. “I don’t look at my life and pay much attention to the bad things that happened, with people who have treated me bad or hurt me. I’m not upset with nobody. I don’t understand why people are that way, but they can be that way. Life is good, life is good.”

The first Illusions of the 2018 season is Saturday, May 12 at 8 p.m. at the Crown and Anchor, 247 Commercial St., Provincetown. The show runs into October. Tickets ($25) are available at the box office and online at onlyatthecrown.com. For more information 508.487.1430.