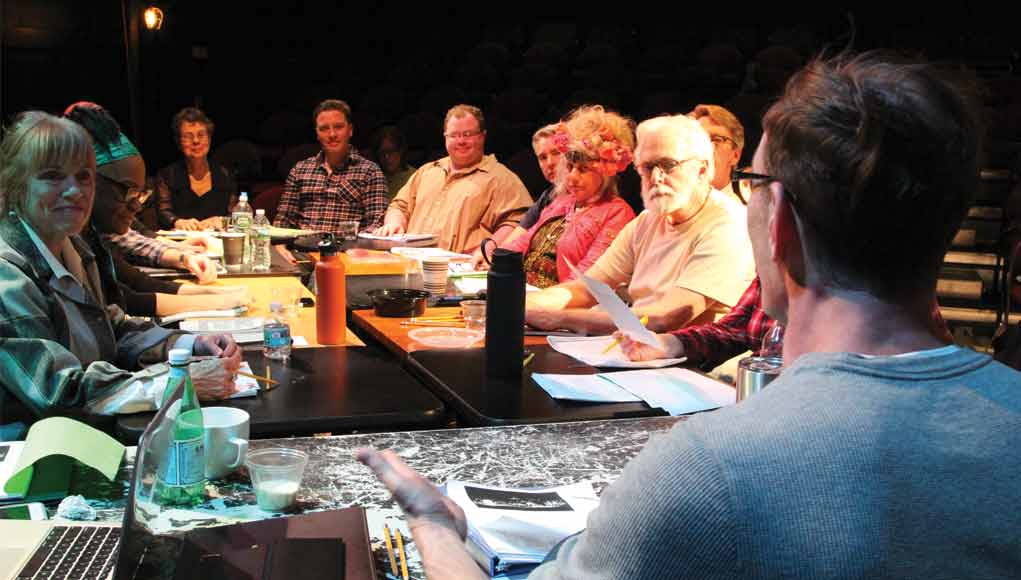 David Drake takes the helm of the Provincetown Theater

The lobby of the Provincetown Theater smells like coffee. The percolator lets out an occasional hiss as the pot fills. It’s already early afternoon, but it’s going to be a long day as the Bradford Street theater prepares for opening night of the classic comedy You Can’t Take It With You. In addition, the 2018 season represents another opening of sorts as the 14-year-old theater space begins its first full year with new artistic director David Drake and tries to finally find focus and footing.

Since it opened in 2004, the Provincetown Theater has struggled to find a defining voice as well as financial security, despite over that time hosting great productions and welcoming thousands of audience members. Provincetown is often called the birthplace of American theater, the spot where as a country and culture we began to speak for ourselves rather than mimic European theatrical traditions and customs. That revolutionary moment in the town’s, and the country’s, history is where Drake looks for inspiration as he takes the helm. Looking around the theater’s new painted lobby, a photo of Susan Glaspell, one of the founders of the Provincetown Players, sits atop an antique piano. Books line the window ledges with the well-worn spines offering titles like “Four Plays by Charles Busch” and “The Comedy of Neil Simon.” And there’s a reproduction of a photo from the original production of Bound East for Cardiff, Eugene O’Neill’s play that premiered at the Lewis Wharf in 1916.

“I’ve really been trying to connect to the roots,” says Drake. “Everyone says Provincetown is the birthplace of American drama. But what does that mean? How do we give it meaning in the way that the Fine Arts Work Center does for writing here and what PAAM does for art? How do we do that for theater?”

To begin, Drake’s been reaching out to as many people as he can who have worked with the theater in the past to find out what worked and what might have been done differently in hindsight. He’s very aware of the “muscle memory” of the institution and that people might be skeptical as it once again begins anew. So far he’s learned a lot, which he adds to his already deep knowledge and experience in theater.

Drake is perhaps best known for his Obie Award-winning one-man show The Night Larry Kramer Kissed Me. And he is no stranger to Provincetown, having been a presence here for many years, including directorial stints in successful productions of Our Town and The Importance of Being Earnest at the theater.

With those deep roots in mind, Drake has a good sense of this community, which can change dramatically over the course of a season, and what it wants to see in terms of theater, as well as the unique business sense it takes to run a theater in a town with a short season. He’s also not going to copycat what other entertainment venues in town are doing in what’s become known in Provincetown as the “Taco Tuesday Effect,” where one restaurant starts a weekly event, spawning several others almost immediately. The other entertainment and performance venues in town offer great shows, and so will the Provincetown Theater. They’ll just be different. And he doesn’t worry about the location, which, since the theater was conceived, has been the point of criticism as it’s off Commercial Street and gets no foot traffic. If it’s good, audiences will follow, says Drake.

His curatorial sense falls into American theater, and for the first show of 2018 he has chosen the classic Kaufman and Hart comedy You Can’t Take It With You, running May 17 through June 2, starring an ensemble cast of 17 actors. Making its Broadway debut in 1936, the play won a Pulitzer Prize, a rarity for a comedy, and ran for over 1,000 performances, another rare achievement for its time. The style of humor sprang out of vaudeville and then went on to inspire television sitcoms come the advent of that era. Drake chose the play specifically for the community of year-rounders and seasonal workers to enjoy before the crush of the busy season, as he’s banking on laughs to start the summer off right.

“It came at a time in the Depression when Americans needed a laugh,” says Drake. “We need a laugh right now the way the world is.”

For June Drake created the 4 Star Solo Show Festival, featuring a one-person show midweek for four weeks, beginning with local drag sensation Liza Lott in Liza Sings the Blues, followed by Venezuelan-born performer Migguel Anggelo in Welcome to La Misa, Baby!, Unitard cast member Nora Burns in David’s Friend, and lastly gay adult film star Chris Harder in Porn to be a Star. Beginning on Monday, July 16 the theater presents Terrence McNally’s Love! Valor! Compassion! with the playwright coming to town that week for a fundraiser. And in October, the Provincetown Theater presents The Laramie Project, a particularly poignant choice, as it coincides with the 20th anniversary of the murder of Matthew Shepard.

Drake goes to take a sip of coffee and realizes his mug is empty. He shrugs it off with an easy laugh. He’s got to run to another meeting. Sounds of hammering come from the theater as the set nears completion. He surveys the lobby and begins to talk about full houses and even the 2019 season. He’s not blindly optimistic. Theater is a tough business, he knows that. But he is enthusiastic, as he knows that when a show hits, it’s a thrill, and when a theater realizes its vision and creates a new point of view, it’s magical.

“Provincetown attracts people from all over,” says Drake. “The washashore quality is interesting to me. People end up here and find a home. Home is a safe place to create and I want this theater to be a home.”

The Provincetown Theater is located at 238 Bradford St. It begins the season with You Can’t Take It With You, performed Thursdays through Saturdays at 7 p.m. and Sundays at 2 p.m., May 17 through June 2. There is an additional 2 p.m. performance on Saturday, June 2. For tickets ($25), information, and full season schedule, call 508.487.7487 or visit provincetowntheater.org.