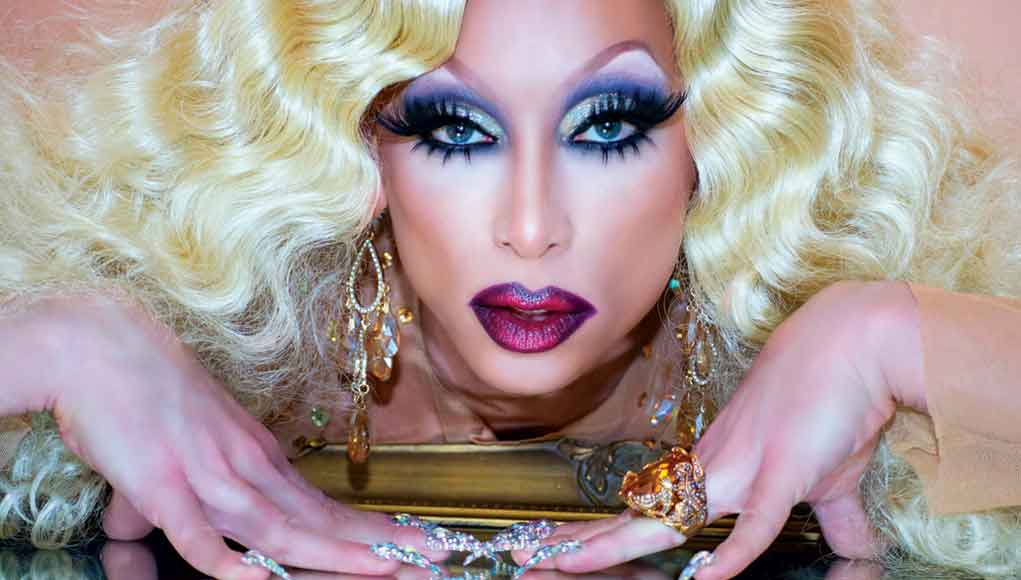 If imitation is the sincerest form of flattery, then parody must be the most honest way of expressing admiration…especially when it comes from a drag queen. Some of the greatest female performers of our times, like Cher, Bette Midler, and the late Joan Rivers, have all gone on the record to say how much they appreciate when their work is adapted by drag queens. It helps keep them relevant, as drag queens often play the role of not just the modern-day court jester, but also of pop-culture megaphones, putting their own spin on the biggest acts of the day, sometimes as punchlines. But it’s worth it.

New York City drag legend Sherry Vine is a master of the song parody, writing hilarious spoofs of hit pop songs for almost 30 years, making her first the toast of the town and then, come the Internet Age, a viral sensation earning fans of her work like Lady Gaga and Katy Perry. Vine’s send-up of Lady Gaga’s “Bad Romance” titled “Shit My Pants” is a classic, as is “Coz My Hole Is So Deep” to the tune of Adele’s “Rolling In The Deep” and her latest, “How I Blew Ya,” inspired by Leonard Cohen’s “Hallelujah.” It’s poetry, really. Scatological poetry, but poetry nonetheless. And it will be on full display when Vine makes her solo show debut in Provincetown at the Post Office Cabaret this weekend in the appropriately named Adult Content.

“Things are always changing. You have to evolve, always.”

“I’m so sad and bored and pathetic spending Friday all alone trying to find a word that rhymes with dick,” laughs Vine about her artistic process. “For every ten I write, only one is a hit. I write a lot of stuff that will never see the light of day. There are surprises, though. Sometimes I try something out thinking it will bomb and people love it. And vice versa. Sometimes you just don’t know. Well, sometimes I know.”

Vine made her performance debut in Provincetown back in 1992 as a cast member of the New York troupe Theatre Couture’s production of The Bad Weed ’73. Considering that for almost 50 years now Provincetown has continually attracted the best drag talent in America, it’s a surprise even to Vine herself that she’s not performed here since. She’s not quite sure why, other than she’s continually traveling and lived in Barcelona and Berlin for periods in between. Even leading up to her limited engagement here in Provincetown, she did gigs in Germany with Joey Arias before heading to the United Kingdom for a two-week tour followed by a run of Golden Girlz Live! in Los Angeles playing Blanche Devereaux with co-stars Jackie Beat, Sam Pancake, Drew Droege, and Selene Luna, and then it was off to Australia for dates Down Under before returning to New York just in time to headline at the revival of Wigstock Labor Day weekend. She’s kept that kind of pace for much of her career.

Just like the entertainers she takes jabs at, staying relevant and on the top of your game takes a lot of work, especially in the fickle world of performance. And then came RuPaul’s Drag Race, which is a bit of a Catch-22 for drag queens. The Emmy-Award-winning show has provided previously unheard of exposure for the art of drag, expanding its fan base and audience globally. But in turn, all the attention, and bookings, began to go to those cast on the show, leaving established queens like Vine with a bit of a conundrum. If she had been at the beginning of her career, Vine laughs, she would have “crawled through shards of glass” to be on the show, of which she notes she is a fan. It was a bit of a “What Would Cher Do?” moment as it was clear reinvention was necessary.

“There was a moment when we older queens got together – Jackie Beat, Coco Peru, Varla – and we all looked at each other and said, ‘What are we going to do?’” says Vine. “But you know, I’ve been doing this for 27 years, and it’s not the first time I’ve asked myself that. Things are always changing. You have to evolve, always. So we focused on what we know we do well, doing a full-length cabaret show. The queens on the show are really, really talented, but not all of them can do that. So we went to look for work in theater and cabarets, not bars where a lot of the Drag Race girls go. And it worked.”

While RuPaul’s Drag Race continues its phenomenal success and its influence continues to have a global impact, including here in Provincetown, there are signs that drag queens in general are enjoying unprecedented opportunities, whether or not they appear on the show. Demand for live-singing, theatrically based drag shows is on the rise, something that’s long been the dominant feature of Provincetown’s drag scene and why it’s a favorite locale for performers and drag fans alike. Vine comes back to her disbelief that she’s never done her solo show here and lets out a sigh of excitement. She’ll be moving to Los Angeles in January, leaving her long-time home of New York City. But regardless of what coast she is on, Provincetown may be a more frequent stop in the future.

“I hope so, I do, but I want to get there first and do this show that I think people will really enjoy,” says Vine. “I’ve been hearing from all my friends who perform there each summer, ‘When are you coming? When are you coming?’ And here I am finally. I’m ready for it.”