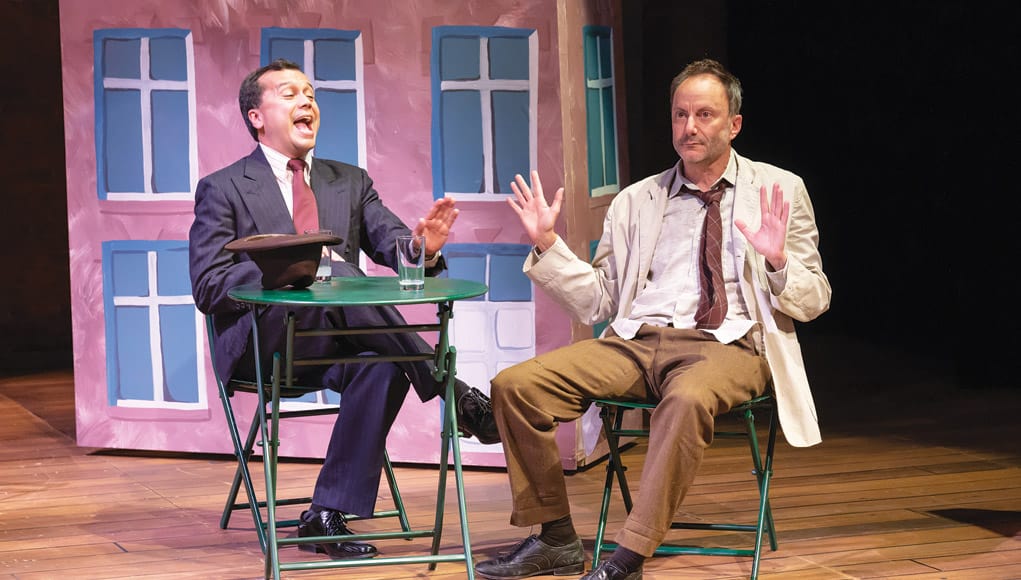 Have you ever had the feeling that the whole world has gone mad and you are the only one who has maintained common sense? Such is the predicament in Eugène Ionesco’s 1959 play Rhinoceros, in which little by little the people in a French town turn into rhinoceroses. While the transformation into a rhinoceros is certainly dramatic, the essence of the play is in the reactions to this epidemic by the average citizens of the town, ranging from disbelief to rationalization.

Wellfleet Harbor Actors Theater (WHAT) performed Rhinoceros as its first production ever, 35 years ago back when the theater was in its original home on the harbor, now taken over by the Harbor Stage Company. It heralded the new company’s intention of serving Cape Cod’s more adventurous theatergoers, something that has continued all these years. So their announcement that they’d be doing Rhinoceros again this year was quite a thrill. It’s not often that we get Ionesco plays on the Cape, or any plays that have that double-edged reputation of being avant-garde. This year’s production is excellent, bringing this brilliant, absurd, hilarious, and insightful play to our attention again.

David Fraioli stars as Berenger, a somewhat alcoholic ne’er-do-well who finds himself in the position of being the voice of reason as people in the town come to grips with the increasing presence of rhinoceroses in town—actually creatures that were formerly human beings but have turned into rhinoceroses. When his friend Jean (Justin Bennett), always critical of Berenger’s weaknesses, falls victim to this plague, Berenger becomes deeply disturbed and afraid that he, too, will succumb. The responses from those around him are surprising in their calmness, with co-worker Botard (Christopher “Chiz” Chisholm) at first declaring it all a bought of mass hysteria instigated by the media who are always exaggerating things; Berenger’s love interest Daisy (Gigi Watson) calmly advocating for tolerance and acceptance of the rhinoceroses, who are after all just as important as human beings; and Dudard (Philip Hays), another of his co-workers, seeing the epidemic as something that happened to people who chose to be turned into rhinoceroses, as a lifestyle choice. Berenger, as deeply flawed as he is, remains the one person who clings to his individuality and sense of reason, leading him to nearly go mad with frustration as everyone around him tells him everything is fine while the human race is on the fast track to extinction.

One can speculate on Ionesco’s original intentions with Rhinoceros and also on how we may apply this absurdist classic to contemporary circumstances. Essentially it is a play about conformity, the ironic failure of logic and reason to explain everything we go through, and just how easy it is for human beings to abandon their individual sense of reality in order to go along with the group. Of course this can be applied to contemporary issues no matter when the play is being performed, because it is a fundamental aspect of humanity that Ionesco brings to light.

Under the direction of Daisy Walker, all performances are stellar, with each actor understanding the particular eccentricities and tonal considerations of his/her character. The set design (Dan Daly) is inventive and the sound design (Grace Oberhofer), featuring rhinoceros sound effects adds much to the production. Rhinoceros is an exceptional play rarely produced these days, but oh so relevant.