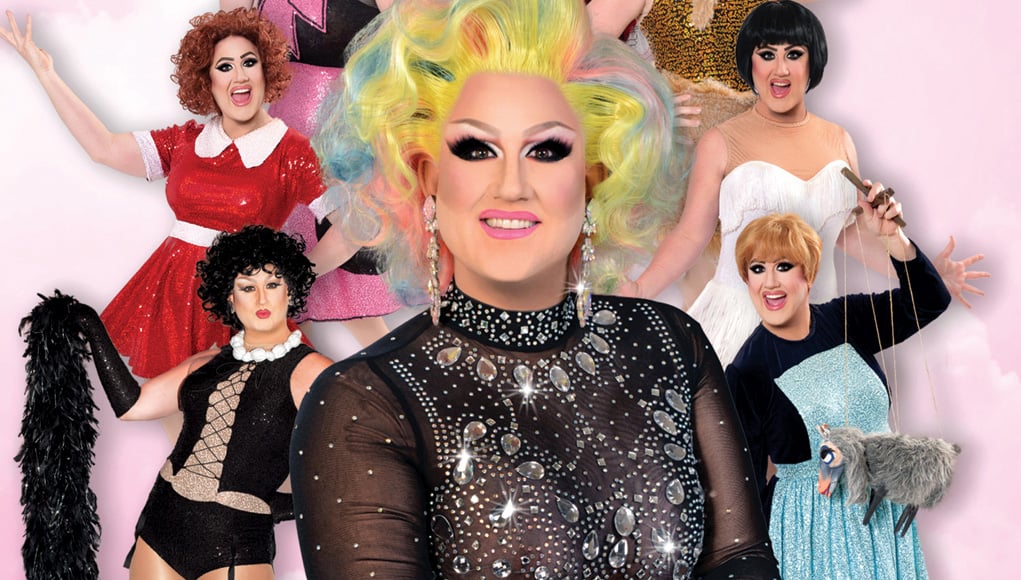 The border between the United States and Canada may still be closed until at least July 21, but thankfully a customs guard somewhere recognized Toronto drag darling Miss Conception as an essential worker. The NAFTA drag queen is a sensation in her hometown as well as here in Provincetown and the winter hot spot of Puerto Vallarta, beloved for her shows that feel as if you’re at a private party, with enough costume changes that she resembles a sparkly Russian nesting doll. With shows canceled in all three countries since March 2020 Miss Conception’s summer run in Provincetown marks her return to the stage. And throughout quarantine she lost none of the effervescence and dynamism that make her the toast of the town wherever she goes. Quite the contrary, as her show The Immaculate Miss Conception is a rollicking good time with an infectious high energy that grabs a hold of the audience from beginning to end.

Perhaps the biggest strength of this show, or actually any Miss Conception performance, is her ability to unite an audience and put them at ease. Devoted drag fans and newbies alike are drawn in by Miss Conception’s smart aleck kindness and self-deprecating humor wrapped in well-earned self-confidence presented with her booming voice as she is the captain of a Willy Wonka-like boat ride through the best of Broadway musicals, with a twist. There is no fourth wall or hiding behind a character veneer. Rather, Miss Conception’s performance style is inclusive and open as well as a celebration of drag that blends theatrical traditions with gender play. Miss Conception puts it all out there, fulfilling all those little gay-boy fantasies that were once verboten, but now both an art and a career. With playful snippets of everything from The Sound of Music to Grease to Annie to Chicago, Miss Conception presents a one-queen Forbidden Broadway, lampooning as well as paying reverence to musical theater.

Sticking to a loose script allows Miss Conception to attach herself to the energy of the audience, taking them on a journey, but also leaving room for a Choose-Your-Own-Adventure quality with her relationship to the room. On a Friday night in mid-June, Miss Conception delighted the crowd that included a well-behaved bachelorette party, two rows celebrating a friend’s birthday, die-hard fans who saw her in Mexico, and a couple of initially grumpy straight men who went because their wives made them. Within minutes everyone was smiling, having fun with each other under the charm of Miss Conception. With no pretense and no artifice Miss Conception’s warmth and generosity is genuine and palpable. In times like these, with so much tumult and division, a force for unity, inclusion, and joy is worth the price of admission alone.