Home ART Legacies of the Body

At 445 Commercial Street last month, a unique show opened without much fanfare, despite the enormous importance of the featured artist. In an exhibition called Tidal Motion, art consultant and gallerist Joe Sheftel presents the work of David Wojnarowicz, a key American artist of the late 20th century. Given Wojnarowicz’s importance as a queer voice in the culture wars of the 1980s and as an artist working with themes of masculinity, the body, sexuality, consumerism, and AIDS (from which he died in 1992), and his close proximity in New York, it’s somewhat surprising to learn Sheftel is the first to bring his work to Provincetown. But here it is, and of course, it makes perfect sense for his works to hang in Provincetown, which has also played such an important role in American art and in the AIDS crisis and ensuing activism. Sheftel, who has been coming to Provincetown for a long time but only recently began living here year-round during the pandemic last year, feels it’s an important step toward something for Provincetown as an art colony. He brought the works once last summer for a small showing at the Mary Heaton Vorse House, and now he has mounted this full season-long show in cooperation with New York’s PPOW Gallery, which handles Wojnarowicz’s estate.

“Lots of people are doing great things here and I didn’t want to double down on what they’re doing, but I thought there was some space to show artists from an international context or from different contexts who aren’t necessarily showing here. And I thought that’s something that could be of interest to local artists. Like I’m sure local artist—and a lot of artists—talk at the galleries about the Wojnarowicz show. And it’s something that fits in here, too… you know, this is very political art from the 80s, and this town was super-politicized in the 80s and such a place of AIDS activism and public health activism,” he says.

Coincidentally, right down the street, the Albert Merola Gallery just took down a show of work by Wojnarowicz’s longtime friend, lover, and artistic mentor Peter Hujar, which included a portrait of the late artist. While it was recently discovered that Hujar did come to Provincetown and take photographs here, there is no evidence that Wojnarowicz accompanied him or came here on his own, however his work is thematically simpatico with the Provincetown of that same era in the 1980s.

His work is deeply personal and reflects the difficult childhood and abuse he and his siblings sustained. It points out hypocrisy and cruelty and manages to simultaneously be about shame and pride in one’s body and identity. His outsider status allowed him to clearly see the pretensions in American life, the layers of conformity and intolerance that continue to stunt us as a people, as a culture. He worked in various media and the show here reflects that, with photographs, prints, paintings, collage, and mixed media.

One of the things that draws Sheftel to Wojnarowicz is how collaborative his work was. “There’s always this kind of interaction with other artists in his work and keeping the legacy of Hujar intact. So I love how you know Hujar was in the catacombs in Italy with his grant, and the bodies start showing up in his work from all these bones and corpses, and that figures in [artist Paul] Thek’s work, and then you see it also in Wojnarowicz’s work. So these legacies of the body come through.”

Sheftel is rotating through a roster of more than a dozen young artists whose works often connect to Wojnarowicz’s through these ideas about the politicization of the body. A great example of this is the work by Nash Glynn, who is transgender but prefers the term “transdisciplinary artist.” In the gallery currently is a nude self-portrait that invites conversation about gender and the ways in which one’s body is expected to conform to the binary. Other artists, such as Jonathan Lyndon Chase (whose works should be on view some time this month), are less direct but reference not only aspects of the body and gender but also Black identity.

“There are a lot of great artists in town and there’s this incredible legacy of art in Provincetown. It was the center of the American art world, and it is still important and there’s still great artists here, but it’s not necessarily taking part in the conversation in quite the same way,” Sheftel explains.

To that end, Tidal Motion is not just about Wojnarowicz. The work of the other artists from around the world extend that sense of sociopolitical commentary, interest in the personal as political, and art that both references and responds to life in all its complexity. Sheftel explains his desire is not to do what other galleries are already doing—which is also relevant, but perhaps in different ways. He wants to make sure that Provincetown’s vitality is maintained through continual exposure to artists outside its local canon, artists who have provocative contributions to many of the issues and ideas we talk about here, and whose work is also artistically challenging, as Wojnarowicz’s was in his time and also continues to be in many respects.

Speaking about the artists chosen for this revolving roster, Sheftel explains, “These were artists whose works I’d seen in my travels as an advisor, doing artist studio visits from galleries who I respect, and I’ve been really excited about their work. With some I have a personal relationship and some I don’t. And they were all really interested in showing in the context of Wojnarowicz, in that there’s this legacy of activism and the body and creating work during challenging times, and all those elements. One of the things we’re living with in a magnified way right now is how does government and health interact?…He was really at the forefront of questions around identity and community at that point, so these artists all have that conversation, but are kind of forwarding it for this moment,” he says.

But he also wants to make clear that he’s not alone in wanting to do this. Without naming names, he says, “There are lots of organizations that are interested in bringing younger artists and people who might not be showing here and different perspectives to town…It’s also to get them connected with the town because that’s the type of person, these are the type of creators and interesting people we want at our dinner parties and all, as neighbors, as renters. It’s keeping that dialogue and keeping people who are not maybe the typical July 4th profile, and the people that have always made this town the community, which are really artists. And artists from all walks of life.”

David Wojnarowicz: Tidal Motion is on view through Labor Day at 445 Commercial St, Provincetown. The gallery is open on Fridays 6 – 8 p.m. 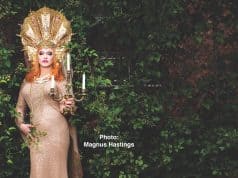