Home ART A Call for Revolution 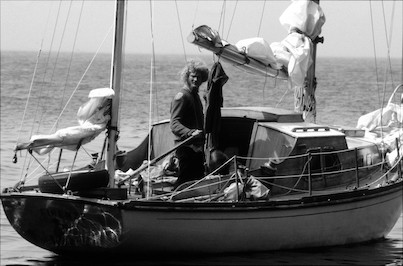 Dr. Michael Moore’s new book, We Are All Whalers, will break your heart and hopefully impel you to action on right whales’ behalf. The book travels between Moore’s personal life and his life’s work as a veterinary scientist investigating marine mammals, whales specifically, and its ultimate objective “to understand, communicate and attempt to rectify…a   huge injustice to these animals.”  (The book is dedicated to “all the whales which could have been.”)

Both brain and brawn go into Moore’s career. At first, using snorkeling and his skills as a sailor developed in waters of his native England for data collecting, he ultimately came to work at Woods Hole Oceanographic Institute. There he created his own lab, enjoys the thrill of discovery, inventing ways of measuring right whale back fat, thus determining breeding fitness; ways of delivering antibiotics and sedatives to whales; and ways of addressing what hurts them through gear and
policy changes.

Speaking via Zoom, Dr. Moore says, “There needs to be a revolution of people expressing their demand for ethical seafood and slower ships.” It is ship strikes and entanglements in fishing ropes (often from lobster and crab traps as well as fishing nets) which kill many marine mammals, critically endangering the already low population (under 350) of North Atlantic right whales.

Moore comments that a whale sliced up by a propellor may succumb relatively quickly, but a whale strangling in rope may swim hundreds of miles, taking a pain-filled six months to die. Well over 80 percent of whales show entanglement scars. A fat whale, once entangled, loses a massive amount of its body weight, its “energy budget” depleted. Add to this “significant upset to feeding opportunities because of climate change.”
The result is that right whales born in the last 10 years are a meter shorter than in the past. These stresses severely limit reproductive success.

Of ways of death, he is very nuanced, comparing a (still awful) death from for-profit Icelandic harpooning as briefer and more efficient than entanglement, and considering native whaling, particularly Iñupiat, with whom he visited in Alaska, to be the most benign. “They have had thousands of years of a sustainable relationship with the bowhead whale, which is a cousin of the right whale,” he says, adding, “you have to be a hunter to survive as on the north slope.”

His tenderness for whale suffering grew as he worked with them, at times unable to save them. It’s also an outgrowth of his mother’s nurture and her too-early death. “In my childhood there was an expectation of caring.  There was mutual respect, a pair of words that have become increasingly important to me as I get older and that is true of my relationship with whales and with fishermen. It’s a pair of words which is missing in our global conservation these days, to our detriment.” Indeed, he says, if we “put to rights our relationship between ourselves, our consumer demands, and right whales, it would be a symbolic example of what we need to do as a species.”

He was impressed with the cooperative, swift methods of Inupiat dissection of whales for meat and blubber, and for their success keeping resource extraction out of their waters so far. “Oil and gas people were quaking in their boots seeing the hunter-conservationist as a significant hurdle to deal with in their business plans.” He is frustrated that scientists and conservationists “don’t carry that kind of weight here in the east.”

“Laws say you can’t kill right whales, he says.” But over decades, “regulations regarding the laws that exist are not enforced.” While competing interests and political pressures led to weak enforcement, ultimately, Moore says, “you and I” are at fault, “because the fishing and shipping industries would not provide services which impact animals if you and I did not want oil, seafood—stuff we think we want to buy.”

Technology changes are essential, and available, but slow in coming. Gear can be rope-free, lying on the bottom, retrieved by acoustical signals to pop up. What needs perfecting is the virtual mapping so that conflicts of, for example, trawlers running over lobsterers’ turf, do not occur.

The Right Whale Coexistence Act recently introduced to Congress, would allocate 15 million dollars to creating, and training fishermen in the use of, remedial gear. Moore says the public should call in favor of it, for only when legislators hear
that people care about right whales will there be the political impact to create change.

Dr. Michael Moore and Stormy Mayo will appear in person at the Center For Coastal Studies, 5 Holway Avenue, Provincetown and virtually on Zoom in connection with the Provincetown Public Library’s Moby Dick Marathon, Thursday, April 28, 7 p.m. For information or to get the Zoom link visit
provincetownlibrary.org or coastalstudies.org.