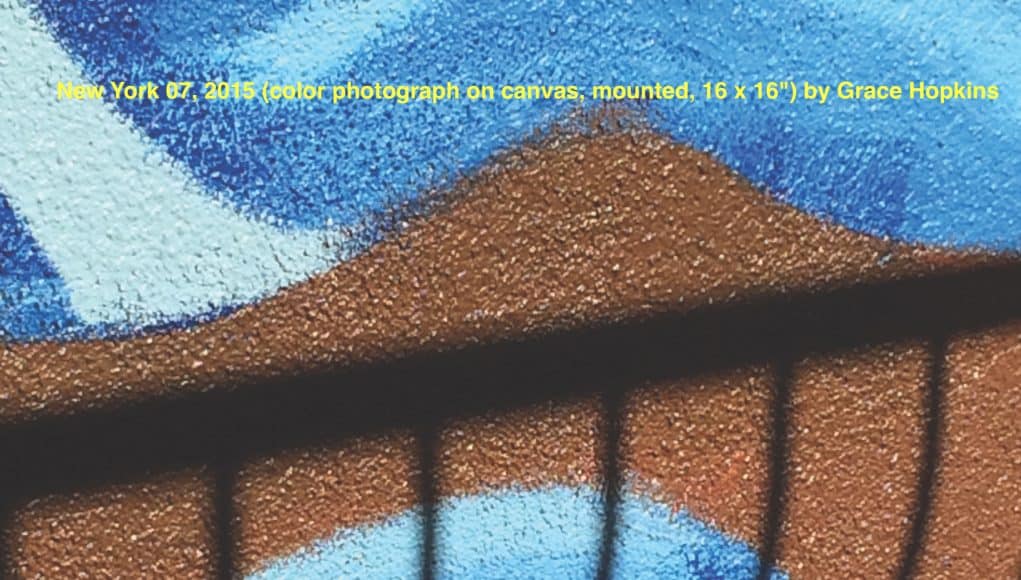 The sounds of August fill the air outside artist Grace Hopkins’ Wellfleet home. And to be clear, the sounds in this part of the Outer Cape are the buzz of bugs and the occasional rustle of tree leaves as a summer breeze glides through, quite a different soundtrack than up Route 6 in Provincetown with the cacophony of Carnival Week. Walking into her home, a very large painting by her father, the late artist Budd Hopkins hangs on the wall next to a smaller piece, but only in comparison to its wall mate, as for her, it’s one of the largest photographs she’s printed. She laughs remembering an old story about artist Franz Kline, who, with her father, moved to Provincetown in the 1950s to study art. A fellow artist asked him what he thought of a small painting he’d done and Kline responded, “Make it bigger.” The artist did and when he showed the larger version to Kline he replied, “Good. Now I can see it.”

Hopkins chuckles at Kline’s bait and switch joke to avoid fessing up to failing eyesight later in life. And as she descends the stairs and walks out the back door of her home, (which itself is a work of art designed by the famed architect Charlie Zehnder), Hopkins contemplates the various sizes of the pieces that make up Confluence, her latest show at the Berta Walker Gallery, which opens this Wednesday.

For many years as an abstract-expressionist photographer, Hopkins’ work, regardless of the size of the finished product, is micro in its approach. She travels throughout the world, using her iPhone to take tight shots of things many would pass by without noticing, or even dismiss as a blight. She focuses on a particularly interesting patch of rust on the bumper of a truck or a swoosh of graffiti on a wall in a part of a city most visitors ignore. Any given piece may only represent a one-inch perspective of a larger subject, but Hopkins’ photographs emit the same control of light, color, and composition of a painting. Each is titled by where they were taken, the number in any given edition, and the year it was created. As she points to a beautiful abstract photograph, in her mind’s eye, she recalls the macro view only she had at that moment. And she recognizes the light as shots taken in Cartagena, Colombia, are golden, while those in New York City are shades of black and white and Italy, that’s umber.

But on her most recent visit to Italy, she says, there was a surprising lack of the usual graffiti, which is so often her muse. “Venice and Rome got a lot cleaner,” says Hopkins. “I don’t know if that’s related to the pandemic or not, but there’s much less graffiti. When I was in college in Boston I would shoot around Newberry Street a lot, but over the years as it got fancified you had to look harder for something more interesting. I ended up going into alley ways and photographing dumpsters. I loved that people would come into the gallery and buy something they found beautiful that was actually a dumpster. Berta [Walker] often says it’s finding the beauty in the ugliness.”

Often, when giving a talk or on a panel about her work, Hopkins is asked if she lives and works on the Outer Cape for its natural beauty and famous light that has drawn so many to create way out here. Indeed, she does find this part of the world beautiful. But as an abstract-expressionist photographer she is often drawn to locales many artists are not. There are of course the exceptions when she is photographing the details of a street mural, like in Wynwood Walls, an often ignored part of Miami that is home to gorgeous street art, or some of her more recent work featuring an up close look at the large mural on the façade of the former Nickerson Service Center in Eastham, where street artists were invited to spruce up what is otherwise a decrepit eyesore. But otherwise, Hopkins is always on an adventure looking for new and interesting points of view. And gentrification is often a death knell for that which she finds compelling. On a recent visit to Marseille, the main promenade of the French port city has been so sanitized as to be rather a bore. But walking up deeper into the city, off the tourist trail, she found Islamic-majority neighborhoods with eye-catching designs and grittier spots that show a patina of life. On a trip to Copenhagen, she was shooting in a locality known for its illicit drug trade. She was so engrossed in her work she didn’t see the drug dealer coming up to her worried she was photographing his underground business transaction. When she explained she was an artist and was just capturing a beautiful piece of graffiti on a crumbling wall, he waved her off dismissively as a crazy American before she could show him some of her shots.

But her work does beg the questions as to what she thinks of graffiti itself, something so many see as a symbol of neglect, crime, and urban ruin, while others defend it as a unique art form of the unheard.

“I don’t find it particularly attractive,” says Hopkins. “I’m not into it for the tag per se, but I do understand getting your ideas out there.”

Grace Hopkins’ Confluence, an exhibition of abstract-expressionism photographs, is at the Berta Walker Gallery, 208 Bradford St. from Friday, August 26 through Saturday, September 17. An opening reception is planned for Friday, August 26 from 5 to 7 p.m. For more information call 508.487.6411 or visit bertawalkergallery.com.