Home DINING GUIDE A Fusion of Flavor at Helltown Kitchen 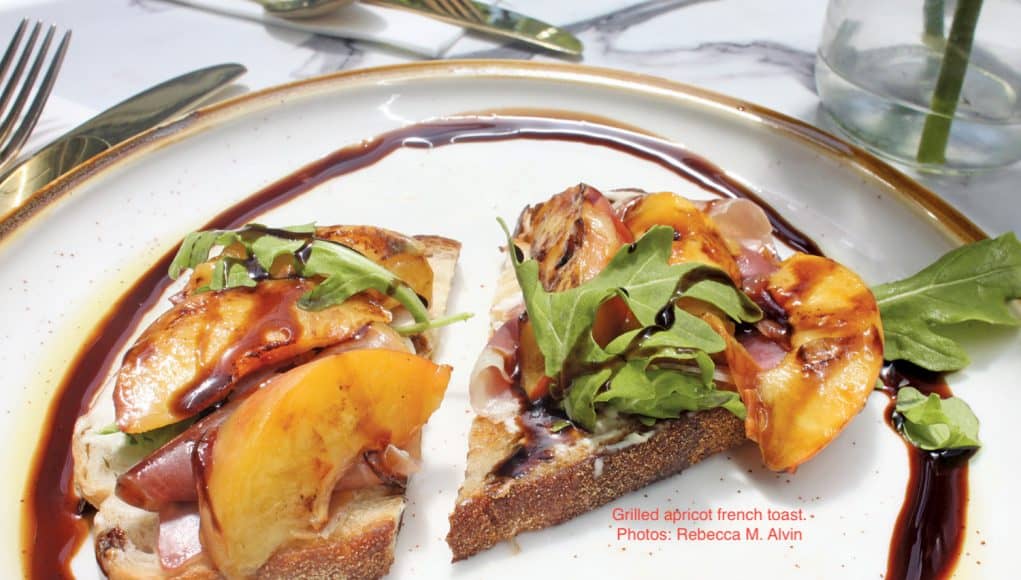 “My mom is a great cook, but my father loved to mix. Like she would make, say, lasagna, and he would put strawberries in it! And I’m like, ‘what are you doing?’ He’s like, ‘I don’t know. Let’s see,’” recalls Willy Garcia, owner of Helltown Kitchen. “I guess that’s what I got from him, is I like mixing things.”

At Helltown Kitchen, Garcia has created a space to fuse cuisines, try new flavor combinations, and offer diners something unique in Provincetown where South American ingredients don’t often make it into the recipes. But while Garcia is from Venezuela and got started in his restaurant career in Miami, with its strong Cuban influence, it would be hard to categorize Helltown Kitchen as just a Latin American restaurant. On the contrary, there is just as much Mediterranean influence on the food here. It’s all about Garcia allowing his curiosity to guide him to new ideas. As an example, he describes an experience at a Miami restaurant where he had an amazing tartufata sauce. “Of course, the chef never gave me the recipe, so I said, ‘you know what? Let me order a second order and study the flavors.” He came back to his own restaurant and worked on the mushroom-truffle sauce until he was able to recreate it. It’s a skill he just naturally has. “I’m not a great cook and I don’t like it,” he confesses. “But I can create and it’s natural for me to find the flavors in a dish and use that.”

Garcia came to the United States at 16 years old, by himself, to study English. But after a year, he decided to stay and go to college. It was then that he began working in kitchens to help fund his education.

“That was rough for me. I’m a kid from a small town and Miami is a big city, ” he says, looking back on his arrival. He struggled with living alone in a foreign country at such a young age but he soon decided he wanted to stay. “I’m super independent. I hate asking for help from people, so I said, ‘whatever I have to do to be on my own and just do it, I will.’”

He worked hard and got himself some stability, but after several years of that, he felt he needed a new challenge. A friend who lived in Truro encouraged him to go to Provincetown and check it out. He came in 2005 for a while and says he “fell in love with it.” He worked at the Mews Restaurant where he learned a lot from Chef Lawrence DeFreitas and formed a friendship with him. He returned to Miami where he was able to open a bar, but after a bit he returned and opened Helltown Kitchen—first as a pop-up and then, just before the pandemic, in its current location.

New this year, Helltown has been offering brunch on the weekends. Like their dinner menu, the offerings are diverse in flavors from the Mediterranean, Latin America, and our local region. For example, the surprising Latin Skillet comes with that standard of Latin cuisine, arroz con pollo, with its warm, homey chicken flavors perfectly done alongside fried eggs, avocado, and sweet plantains, which are delightful against the savory eggs. They also offer arepas as a kind of elevated breakfast sandwich. These traditional Venezuelan corncakes are offered here with either crab and avocado or scrambled eggs and queso blanco. The cornmeal crunch and flavor pair well with either filling. For a sweeter brunch item, look for grilled apricots or the balsamic strawberry french toast with feta-cheese whipped cream.

Dinner items demonstrate Garcia’s around-the-world philosophy as well, with the Indian Pork Vindaloo, chimichurri steak, and Caribbean Seafood Stew featuring local cod in a yellow coconut curry broth with vegetables, cilantro, basmati rice, and fried plantains on the side. And of course, the scallops with that tartufata sauce Garcia raves about, are also on offer.

It’s an eclectic and unique menu, matched by the vibe— you’re on Commercial Street, so you feel that Provincetown energy, but the restaurant is tucked back, just far enough to be its own place apart from the fray. Everything from the music to the menu is thought out. Garcia explains, “ I want people to have an experience.”

Provincetown. They are open through October. For more
information call 508.904.0909 or visit helltownkitchen.com.