Home FRONT PAGE Any Way You Slice It 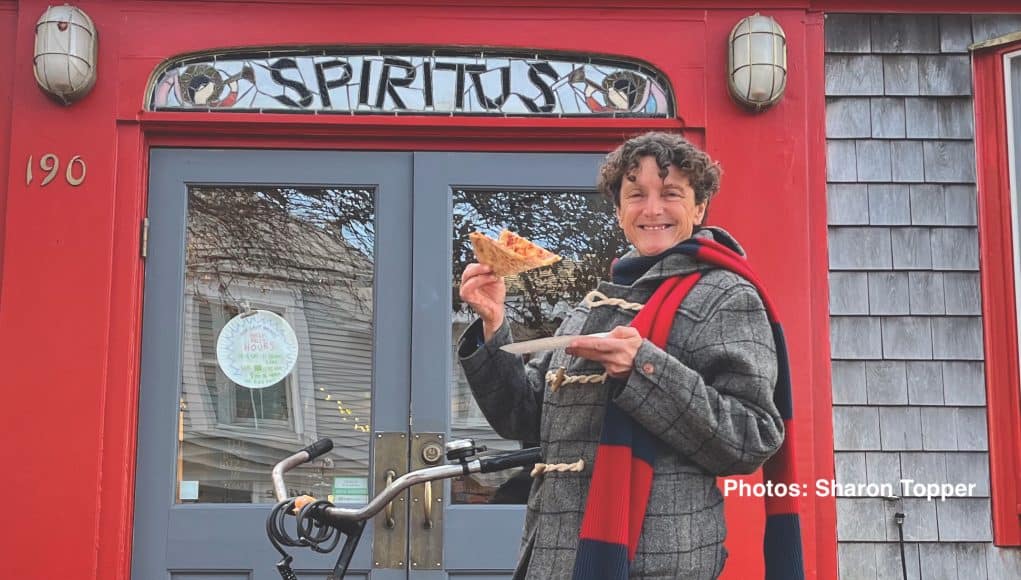 Zoë Lewis has the classic Provincetown origin story. She came for a summer and never left. Now, 30 years later, the vaudevillian musician reflects on her time thus far with a new musical variety show, A Slice of Ptown. And for much of those 30 years Lewis has had an interesting vantage point on the goings on in town, as she lived between Spiritus, the famed pizza parlor that is also a late-night gathering spot, and the Ranch, a libertine guest house catering to gay men. She’s seen a lot. And all from a delightful little apartment that was what locals call “old Provincetown,” with oak beams taken from ships, with crooked floors that creaked in a ramshackle house built in the 1880s. What’s more, Lewis’ landlord, Diana Henley, charged an affordable rent as she had a soft spot for artists, musicians, and bohemians, in general. Old Provincetown indeed.

“It always remained the same,” says Lewis. “I always say she was my benefactor. She allowed me to be a musician in town. That’s old Provincetown, when townies cut a deal to artists and actors. That enabled me to live off music. That’s my slice of Ptown. We all have a slice of town. That’s what the show is all about. It’s how I got here. It’s all the things I love about Provincetown. It’s about some of the things that are gone. It’s history. It’s like a musical memoir.”

Originally from the British seaside village of Rottingdean on the English Channel, Lewis has lived the life of a musical vagabond, traveling to over 70 countries. In all her travels no one place has captured her heart and imagination more than Provincetown. In some ways it reminds her of home, a northern oceanside town. She jokes, where she’s from there’s lots of little old ladies with poodles and here there there are lots of men with the same breed. Lewis rattles off a list of all that she loves and takes a deep breath preparing to deliver more as she sits outside Frog Cottage, her home in a wooded spot in town next to a small wetland croaking with numerous namesakes of her house. She’s taken to country living, she jokes, as nowhere in Provincetown is far from anywhere else in town. Nevertheless, life is oh so mellow compared to being bookended downtown between two major pulse points of the town’s wild ways.

“I always thought Spiritus is the nucleus of town,” says Lewis. “Now I live in a quiet neighborhood, but all you have to do is go to Spiritus to get a read on the town.”

Lewis’ observations over the years is at the core of A Slice of Ptown, which she’ll present on selected dates throughout the fall with her co-stars Roxanne Layton on the recorder, Parker Ousley on cello, Qya Cristal with vocals, and The Gorgeous Cigarette Girl of Speakeasy Night fame portraying a variety of characters. Lewis’ castmates are all seasoned and exceptional musicians, adding their own flair to this musical walk down memory lane. Layton frequently tours with Mannheim Steamroller, the American neoclassical new-age musical group, while Ousley delights with his classical cello performances, and of course Cristal has been wowing audiences in Provincetown for several years now with a powerhouse voice and stage presence to match.

Above all else, A Slice of Ptown is a love letter to this kooky town on the tip of Cape Cod. A hallmark of Lewis’ work is her positivity and optimism. While of course known for her concerts and the theatrically infused Speakeasy Nights, time traveling to the era of Prohibition, Lewis first dipped her toe in the world of musical theater almost 10 years ago with the smash hit show Snail Road and again several years later with Across the Pond, a musical adventure set on a jetliner. A Slice of Ptown delighted audiences when it premiered in May. And now having an autumnal revival, the show is a perfect salve for the tired bones of weary townies and those visitors who prefer Provincetown dialed back a notch after the bacchanalia that is summer. It’s also an antidote to fears and concerns over changes in Provincetown. For a town that can exhibit such beautiful examples of love, community, and inclusion, when greed, ignorance, and an obnoxious sense of entitlement are encountered in town it can feel especially disheartening. Not to worry, says Lewis. She’s seen a lot of changes since she first came ashore here, and what has remained the same is the heart and soul of Provincetown. You just sometimes need to remember that, and A Slice of Ptown is the perfect occasion to do so.

“It reminds us of what we have in Provincetown,” says Lewis. “If you’ve lost touch with what you love about Provincetown it makes you fall in love all over again.”

A Slice of Ptown by Zoë Lewis is at the Post Office Cabaret, 303 Commercial St., Provincetown, Sundays, September 18 and 25 at 7 p.m. with a return performance on Friday, October 14 at 4 p.m. Tickets ($35) are available at the box office and online at postofficecafe.net. For more information call 508.487.0087.