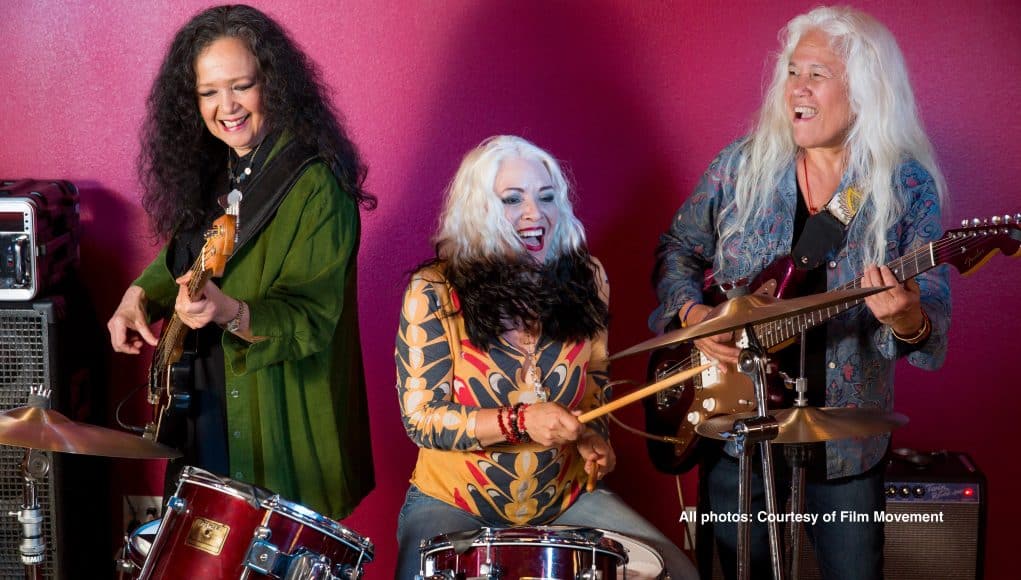 One of the great strengths of documentary film is its ability to explore aspects of the human experience that we’ve either forgotten or never knew in the first place. Often this is achieved not by taking a macro approach, but rather through the stories of individuals whose life experiences resonate with us, often along unintended lines. We can watch a documentary about an artist and connect with that artist even if we are not the same race or gender, even if we are not an artist at all. Through specific encounters that the documentary filmmaker shares with us, we ultimately see the threads of our common humanity.

Bobbi Jo Hart set out to make a film about Fanny, a forgotten all-female, Filipina-American rock band that, as early as 1972, had the attention of the music world. But even 10 year later, all the work that they did, all the ground they broke, all the preconceptions about women in rock music that they’d confronted and proven wrong had been forgotten. Now in their seventies, the original members of the band had come back together for a reunion, recorded a new album, and at this very moment some of them are touring together. But whatever happened to Fanny? And why have two generations of female musicians missed out on their accomplishments?

The history of rock n’ roll, as collectively agreed upon, is one in which female participation and innovation are curiously peripheral or even entirely absent. The familiar narrative of great African-American male blues musicians influencing great white male rock musicians is so ingrained in us that it’s almost strange to question it. The one exception is the female vocalist. Aretha Franklin, Tina Turner, Janis Joplin, Debbie Harry, and on and on are examples of women who were able to penetrate the male-dominated rock world, but only so long as they stayed in their lane. For some reason, picking up an instrument changed the rules. And from 1972 all the way through the 1980s, female instrumentalists in rock music could only exist as exceptions and even then, it came with restrictions on how hard they could rock out.

But before all that, June Millington, guitarist, singer, and songwriter in Fanny tore up the stage and became one with her guitar onstage, knocking down any conventional notion of what women could do together as rock musicians.

Millington, who will be coming to Provincetown for the film’s screenings during Women’s Week, says it’s “kind of an intricate question” why playing an instrument has been so radical for women to do in the rock music realm. “I think people fall into just sort of prejudicial thinking, and it becomes more of an emotional thing than it is actually an intellectual decision-making process, you know? That’s all I can come up with, because it’s so stupid really,” she theorizes. But this question seems fundamental to how Fanny was treated, apart from any of the other aspects of their intersectional identity as a group of women of color—Asian women, in particular, some of whom were lesbians, and none of whom catered to male sexual fantasies with their public image.

“Usually the first question that we were asked in interviews with Fanny was, ‘What does it feel like to be a girl guitar player?’ or ‘ What is the feeling of being a girl bass player,’ you know, whoever they were talking to in the band. And it was so insulting,” Millington recalls. “That question was so pervasive. I mean, every single interview, everywhere… I realized after, you know, like four years of making albums and being on the road, they were never going to let me out of that box. And I’m so much smarter than that, so much more talented than that. But they could never get past that first question?… It was never like, ‘what type of guitar do you play, how did you get that sound? How did you create the architecture for so-and-so song, you know, the musical architecture?’ Those would have been interesting questions for me, but they never got to that. Never.”

Still, as the documentary shows, Fanny recorded prolifically, releasing a new album every year in their heyday; they appeared on The Dick Cavett Show, The Helen Reddy Show, and other major television outlets; and they toured all over the world garnering fans of all genders, just like their male counterparts. Interviews with other musicians, both male and female, demonstrate that amongst their colleagues there was no question of their audacious talent and musicianship. But this support didn’t necessarily translate into tangible, vocal support in real-time in most cases.”Well, they weren’t about to stick their necks out,” Millington confirms. “But they weren’t asked about it.”

The one exception amongst other musicians, according to Millington, was David Bowie, who she says “was always ahead of the pack.” In fact, in 1999, in an issue of Rolling Stone that asked famous musicians about the history of rock music, Bowie used his privilege to give them a huge shout-out, saying: “One of the most important female bands in American rock has been buried without a trace. And that is Fanny. They were one of the finest f—king rock bands of their time…They’re as important as anybody else who’s ever been, ever; it just wasn’t their time. Revivify Fanny. And I will feel that my work is done.”

Millington and her bandmates worked hard to not let anything hold them back. At one point, drummer Brie Howard-Darling was touring and kicking ass on the drums while 5 months pregnant. Interviews with male and female colleagues in the film continually cite this work ethic and this union with the music, this devotion in the face of racism, homophobia, and most of all, deeply embedded misogyny.

“Misogyny, sexism, racism —those are huge, crushing realities; they’re not just issues,” Millington explains. When she and her sister arrived in California from their native Manila, Philippines, they encountered racism immediately, she says. But the racism in the music industry was more subtle, more about ignoring their ethnicity than it was saying anything obvious about it. It was the misogyny that really was blatant.

“Man, misogyny—that’s a tough one. I couldn’t even really face it. You know what I did? I just got better and turned up. That’s what I did. That was my statement; rather than trying to refute or talk to people about those issues, I just got better. That’s the whole thing. That’s the end of the story,” Millington explains.

Her awakening came later while producing Holly Near’s Fire in the Rain in1981. “She and I had a fight, and we were yelling at each other, and she said, ‘Don’t internalize this.’ And I didn’t even know what ‘internalize’ meant, okay? That’s how far behind the curve I was. So these were not issues for me; they were crushing realities. And they did crush me, except in the one place that meant the most, which was music. And hey, I am emerging triumphant. So there!”

Fanny: The Right to Rock is showing in the Women’s Week Film Series at Waters Edge Cinema, 237 Commercial St., 2nd Fl., Provincetown, on Thursday, October 13 at 7 p.m. and Friday, October 14 at 1 p.m. June Millington will attend for a Q&A after each screening. Proceeds from tickets sales to this film will benefit the Institute for the Musical Arts, a nonprofit to support women and girls in music and music-related business founded by Millington and her partner Ann Hackler in 1987, for more information check out their website: ima.org. For tickets ($14/$12 students and seniors on Thursday; $11 on Friday) and information or to get a series pass, visit provincetownfilm.org.

Fiction/Doc Hybrids in the Series

Although there are a number of feature documentaries (Queer Riot, The Rebellious Life of Mrs. Rosa Parks, and Clambake, to name a few) addressing intriguing subject matter in the Women’s Week Film Series, there are also those films that incorporate nonfiction elements into other forms of storytelling. For example…

This hybrid fiction/documentary film follows the journey across America of Tana (Lily Gladstone), a Native American woman who is driven to travel from Minnesota to Texas on a personal journey. Morrisa Maltz’s film is essentially a road movie, highlighting the people and places of the American Midwest in an unconventional manner and through the unique lens of its Oglala Lakota heroine in the post-2016 political moment. As she travels to truckstops and retail stores and visits family on her adventures in self-discovery, the film veers off on tangents with minor background characters portrayed by non-actors, playing themselves, essentially, who give us monologues about their real lives, their philosophies, their struggles. The technique paints a more complex picture of America in all its diversity of experiences woven in and out of Tana’s particular narrative. It’s a quiet, moving film that takes big risks in form and casting that pay off big-time. This film screens on Sunday, October 16 at 1 p.m., with producer Laura Heberton attending for a post-screening Q&A.

Experimental filmmaker Elisabeth Subrin has been making unconventional films—using both film and video/digital formats—for more than two decades. In this program of films, each of the three vastly different short films incorporates something from real life into a study of cinematic language, making us think about the subject matter and form together, as intricately connected aspects of the experience. Included are Shulie (36 min), a recreation of a film made in 1967 about feminist Shulamith Firestone when she was still an art student; Sweet Ruin (10 min), an experimental adaptation of Michelangelo Antonioni’s unrealized script, Technically Sweet, with Gaby Hofmann as both the male and female leads; and her most recent work Maria Schneider, 1983 (25 min) in which she features three reenactments of an interview with the actress from 1983 and with three different actresses. All of these films are fascinating reimaginings of other projects, but the last one is particularly provocative as it looks at the experience of an actress grappling with the aftermath of her role in Bernardo Bertolucci’s Last Tango in Paris in a powerful, intersectional way that is haunting. These films screen on Thursday, October 13 at 1 p.m., with Subrin attending for a post-screening Q&A.